The Whisky Boys are arranging for a a special tasting of this 40 Year Old in the next week or so. Look out for our tasting notes soon.

Bunnahabhain has announced that it will release a one-off rare single malt that has lain undiscovered for four decades at the Islay distillery.

Bunnahabhain distillery, which is located on the north-east of the isle, will release only 750 bottles, which will be individually numbered and hand signed. 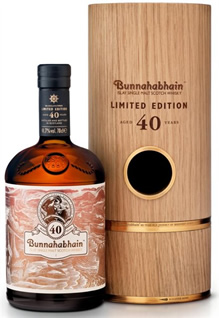 Hidden for 40 years, the whisky quietly matured until Master Distiller, Ian MacMillan, discovered the casks listed in the distillery ledgers: “It was an exhilarating moment to stumble on such a special find,” he said. “There are very few 40 year old Islays and unlike any other, Bunnahabhain’s taste is considered unique because the distillery does not heavily peat the fine malted barley.”

The Master Distiller recognised the significance of the discovery after finding the ‘Turney’ casks, which were filled with the precious Bunnahabhain malt over 40 years ago by eminent Glasgow wine merchants, J G Turney, and renowned for being the highest standard of quality.

Michelle Lansdowne, Senior Brand Manager at Burn Stewart, added: “ We are expecting a good deal of market interest in the 40 YO and with such limited availability of this one-off prestige bottling, it is sure to appeal to international collectors of rare malts.”

To capture the extraordinary journey, Bunnahabhain commissioned renowned illustrator, Iain McIntosh, to retrace the voyage through the specially designed labels. Each bottle is presented in a bespoke oak gift box containing a secret compartment that reveals hidden designs replicating the ‘Journey of Discovery.’

The multi-award winning Bunnahabhain is the flagship malt whisky from Burn Stewart Distillers and is exported to over 30 countries globally. Unlike its neighbouring distilleries on the Island, Bunnahabhain embodies “the gentle taste of Islay”, as it is the only non-peated Islay malt.