Glenfiddich marked the second release of one of its rarest and most precious expressions of single malt whisky with a unique coming together of two 50 year old icons – as a highly covetable bottle of Glenfiddich 50 Year Old was met outside the doors of Warehouse 8 by an iconic 1960 AC Aceca vintage car. 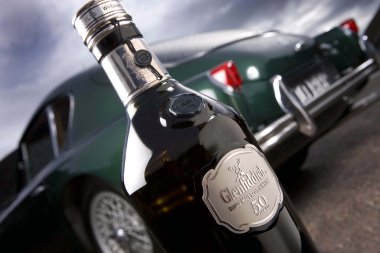 With a strictly limited supply of just 450 bottles – just fifty are released worldwide each year – the second release of the Glenfiddich 50 Year Old is a significant landmark in the history of single malt whisky and an occasion eagerly awaited by whisky connoisseurs around the world.

The 50 bottles will now travel to some of the world’s most prestigious airports, retailers and high-end establishments, where they will retail for £10,000 per bottle.

Brian Kinsman, Glenfiddich’s sixth Malt Master commented: “Having gently aged in the semi-darkness of Warehouse 8 for half a decade, the Glenfiddich 50 Year Old is a true reflection of our dedication to producing the ultimate single malt Scotch whisky.“

To taste, the Glenfiddich 50 Year Old is initially sweet with a zesty orange marmalade and vanilla toffee, which then cascades through a wonderful series of layers: aromatic herbs, floral and soft fruits, silky oak tannin and hints of gentle smoke. The finish is exceptionally long with a touch of dry oak and the merest trace of peat.

Brian Kinsman said: “The nose of the Glenfiddich 50 Year Old is beautifully harmonious with an uplifting, vibrant and complex aroma. It’s a real honour to be part of a single malt whisky that represents the very pinnacle of our whisky-making expertise.”

Peter Gordon, the current Chairman and as a fifth generation descendent of the distillery’s founder, is the great-great-grandson of William Grant, commented: “As our founder did over 120 years ago, we consistently plan ahead and lay down stocks of whisky for future generations to cherish and enjoy. Because of this pioneering approach, Glenfiddich has more aged stock than any other distillery. The Glenfiddich 50 Year Old is the ultimate expression of this foresight and we are hugely proud of it.”

Eagle eyed whisky fans will spot small differences with this second release – the bottle’s wax seal, the metal plate inside the leather-bound case and the hand written certificate all feature the numbers 51-100.

Design cues have been painstakingly taken from archives that record the distillery’s 120 year history; the hand-blown bottles are individually numbered and presented in beautifully hand-stitched, leather-bound cases, inspired by William Grant’s personal ledgers. Each bottle is decorated in Scottish silver, crafted by Thomas Fattorini, a sixth generation silversmith, and individually imprinted with William Grant & Sons’ own hallmark.

Britain’s oldest car manufacturer, AC has produced vehicles since 1901 and the marque carries enormous prestige. The hand-built AC Aceca was extremely innovative – the engine was considered to be an ‘engineering marvel’ – and only 348 Acecas were produced between 1954 and 1963. The car pictured at the Glenfiddich distillery left the factory in 1960