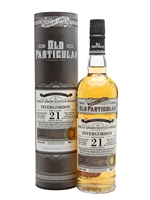 A 21-year-old grain whisky from Invergordon. Distilled in October 1994, it was aged in a refill barrel before being bottled in February 2016 by Douglas Laing as part of the Old Particular series. Velvety and sweet with notes of vanilla and cream soda.