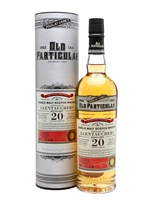 This 20-year-old whisky was distilled at Glentauchers in December 1996. Matured in a refill barrel, this is sweet and lightly spicy with notes of nutmeg, apple sauce, toffee and golden syrup.