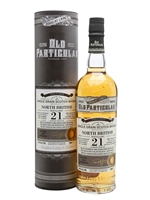 This North British single grain has been bottled for Douglas Laing's Old Particular series. Distilled in October 1994 and matured for 21 years in a refill barrel, this is full of notes of vanilla, honey, chocolate and coffee.