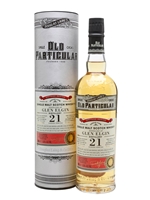 Distilled at Glen Elgin in December 1995, this 21-year-old whisky has been released by Douglas Laing as part of the Old Particular series. Matured in a refill hogshead, this is sweet with notes of fruit drops and wine gums.