Gaelic for long journey, Turas-Mara is inspired by the travels of the many Diurachs who were forced to emigrate during the 18th and 19th centuries, in what became known as “The Clearances”, to countries including the US and Canada.

Turas-Mara is an expression that honours those who carried Jura in their hearts, as they travelled and migrated across the globe. Jura Turas-Mara allows travellers to experience a little bit of Jura as they embark on their own journeys. 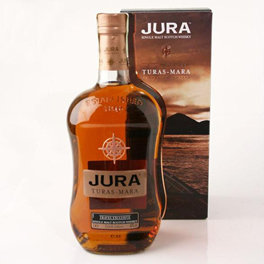 Each pack is adorned with a compass to help steer the traveller home, and a poem written by a former resident of Jura, Jessie Scott. Jessie lived on the island during the 19th century and witnessed many of its inhabitants depart Jura by boat for the shores of North America. The poem is an ode to her homeland and has been immortalised on a plaque which currently stands on Jura’s Corran Sands beach.

“The spirit of travel is reflected in this whisky as it takes its unique and exotic flavour from casks sourced from America, Spain, France and Portugal. Its fleshy notes of vanilla and toffee and black cherries on the palate will make duty free travellers long to visit our wonderful island.”

A very fine dram indeed, will have to look out for this one when next at the airport. This is a dram that all Jura lovers must try and get a taste or indeed a bottle, it is that good.