This Q & A session is with Darren Rook the Strategic Project Manager of Master of Malt is one that Nicola has been waiting for, as she has had many a conversation with him. Darren as helped the Whisky Boys out on many an occasions, especially when we did our Bourbon Month last year, and we both enjoyed his company and one or two drams at Glasgow’s Whisky Festival. 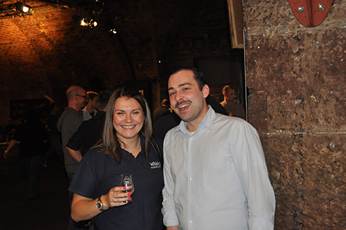 Both Jim and Nicola look forward to meeting Darren once again (Hopefully sooner rather than later) and sharing the odd dram and tale or two.  Anyway, below are the reuslts of the Questions we put to Darren:

1. Q. When did you first get involved in the Whisky Industry and why…. maybe it was a calling from the angels, or your family were already involved?

A. Great question! Despite being a whisky fan from an extremely young age it wasn’t until late 2005 when I’d say I first truly got involved in the whisky industry in some capacity (supposedly at the 4 years old I’d regularly sneak drinks from the bottle of Ardbeg on the bottom of an old cocktail atlas my parents had).

The turning point was meeting a great drinks rep called Ian Mclaren while at college and managing a small cocktail bar. Ian had been a bar trainer for the Montpelier Group in Edinburgh and I think he really made me want to get more involved. A couple of months later I started to manage a second bar for a different company and with the help from the boss (now my wife) we built a small Whisky bar where we would host themed film and tasting evenings. Back then I was really blagging it a lot, but people were massively supportive and in fact still are! Working in the industry can be really humbling as you’re learning every day.

A. I’d love to be on the west coast of Canada, in Vancouver or on Vancouver Island (which is our long term plan). I think if I left the industry tomorrow I’d still blog at the Whisky Guy, but what would I be doing for cash? I’ve got some great management experience in retail and bars, plus I’m trained as an Aborist so can always fall back on those. However, I would love to train as a carpenter if I could make it pay.

A. Obviously being at Master of Malt and putting together Whisky4Movember are up there, but I think my proudest moment so far has been as a Manager and Ambassador for the Scotch Malt Whisky Society in Edinburgh and London. SMWS is very much the place to cut your teeth on for both staff and members. It’s so imbedded in the roots of modern Whisky retail and without the pioneering spirit of its founding members we might have a very different industry today.

A. I think from each region there’s so much choice it’s difficult to choose just one distillery. I’m a big fan of many of the international distillers too, particularly in Japan. One thing I’ve learnt over the last 5 years is that my tastes are constantly changing. I didn’t really care for or appreciate sherry aged Whisky back at the start of 2005 and was a huge peat freak. Now I know a little bit more it’s really expanded my palate, however, looking at my sampling shelves I do have a lot of half drank Ardbeg and Karuizawa.

A. Neil & Joel from Caskstrength and Joe McGirr from SMWS London are great drinking partners, so without a shadow of a doubt those chaps. The location would have to be Neil’s home bar with the BBQ on. Otherwise an evening at the Connaught Hotel Bar would be great!

A. The most recent whiskey to catch my attention was Parker’s 27 Year Old bourbon.

It’s been on the market a little bit of time and I missed trying it originally. It’s one of the most stunning and balanced bourbons I’ve ever tried. The nose is great – Christmas spice, butterscotch, lots of dried fruit and vanilla cream. The mouth feel is thick & chewy, full of tangy spiced oak with puckering balancing like you’d expect from bourbon of this age. It ends on a tobacco smoke and sweet richness. Delicious!