This malt that comes from Ireland’s oldest Whiskey Distillery which celebrated it’s 400th Anniversary in 2008.

You can check out the Whisky Boys tasting of Bushmills Whiskey Single Malt from February 2009. 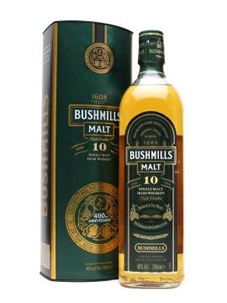 Jim has visited this grand old distillery on a couple of occasions and is hoping to go back sometime this year with Nicola.

This fine dram is triple distilled and is made with 100% malted barley and then matured in Bourbon barrels and could be said to be the benchmark for Irish Malt Whiskey.

You can get yourself a bottle of this malt at most supermarkets and certainly on-line, this fine dram is availble from Master of Malt for only £27.95.

When you are over in Ireland remember that just down the road from Bushmills Distillery is the fantastic Giants Causeway and the heart stopping Carrick-a-rede rope bridge.

So go over the sea to Ireland and ensure that Bushmills is very high on your agenda, and when you sit in their bar let them know that the Whisky Boys said hallo.