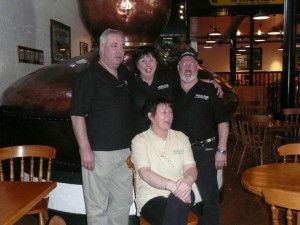 visit that was to engulf many things , the main one being saying farewell to Jacqueline’s Mum who we were returning to Rathmullen, by scattering her ashes on that beautiful sandy beach. But there were other trips etc we were going to schedule in whilst in Ireland, these being:-

Visit and overnight stay with Philip (a previous guest taster) and his wife Lorraine in Donaghadee.

Drive along the Antrim coast.

This article will only concern itself with our visit to Bushmills. 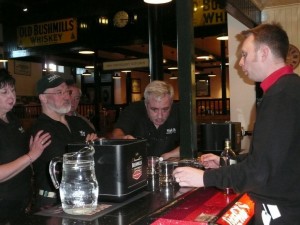 Arriving at Bushmills, Jim, Dougie, Jacqueline and Catherine were all sporting our Whisky Boys polo shirts, followed by Philip and Lorraine a few minutes later.

We found directions to the distillery were quite well signposted and the car park was more than ample.

We all headed to the main entrance which took you to the gathering area for the tour, the shop and the restaurant and bar.

At the entrance we were approached by a member of the Bushmills staff, he advised us when the next tour was, and where the shop and the bar were located. 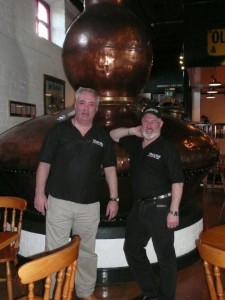 We then proceeded to the very well stocked shop and browsed around for a little while before heading to the bar.

On arrival in the bar area we approached the bar to obtain some wee drams, only to be told this area was for tasting after a tour, the girl suggested we went up the few stairs to the cafeteria area where we could obtain our drinks. Why did Bushmills have such a nice bar in full view of all visitors coming in from the shop only to tell them that unless they were on a tour they could not even buy a nip or two.

We felt a little underwhelmed having to go up to the cafeteria to obtain our drinks, where stock was limited. But we chose our drinks and sat down next to the old copper still and took in the pleasant surroundings, talking to the wives about the old still and the spirit safe in the entrance area and explaining the Bushmills process in Whiskey making to them.

Whilst enjoying our chosen wee drams we were approached by the duty manager Robert Galbraith, who had noticed us all sitting sporting our polo shirts bearing the Whisky Boys logo, and instantly took to having a discussion about Bushmills and all things Whisky.

After a little while Robert invited us up to the tasting bar where he insisted in opening an extremely rare Bushmills 21 year old single Malt , which both Whisky Boys found to be very mellow with a touch of sweet spice laced with dark chocolate, it is very complex and we thought that we need to obtain a bottle so that we can give it the full Whisky Boys tasting treatment in the very near future. 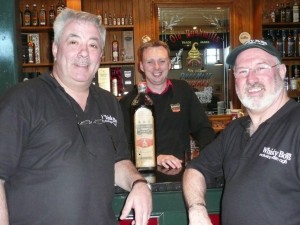 We all continued to talk turkey about Whiskey and as a special treat Robert brought out from under the counter a blend, consisting of all the Islay Malts together with a single Bushmills malt a very rare dram indeed. Robert let us have a wee nip of this exceptional dram. Being island and coastal Whisky lovers Dougie and Jim found this nip to be right up our street.

We have only detailed the two most exceptional nips we had that day, but we also tasted the Black Bush, the 10 year old and 16 year old Triple Wood, all of which we found elegant and delightful.

All in all Robert was an excellent host, well versed in all things Whisky, Scotch as well as Irish.

The Whisky Boys can only give Robert a big thank you for making our visit to Bushmills very memorable.