The last six months have been very difficult for both Jim and I as we have both said goodbye to our only remaining parent. My final goodbye to my mother was the scattering of her ashes in Co Donegal in a place called Rathmullan (where my grandfather was from).

When my mother died I requested that Cathie and Dougie come along with us to Ireland which would give me additional moral support and allow them to have a flavour of Ireland as this would be their first visit.

This was always going to be an emotional trip, but I also wanted it to be a fun, light hearted experience.

So there we were, the Whisky Boys and wives off on a Celtic adventure. We set off on a fine morning, car loaded with sweets and Dougie the nominated DJ in charge of music while Jim was the driver. Cathie and I were in the back seats coordinating chocolate limes, Murray Mints and fruit sherbets. We were sailing from Stranraer to Belfast and enjoyed a really good drive down the coast road which took at least a couple of hours.

When we arrived in Stranraer lunch was the priority closely followed by a Chemist for Cathie to get sea sickness tablets (just in case the crossing was rough). Then it was off to the Ferry. I should mention at this point, that while waiting in the queue we had a celebrity encounter (but that is another story & have photos to prove it). As it transpired the crossing was very smooth, but Cathie thought, to be cautious, she should take one of the tablets.

To pass the time on the Ferry we played cards and had a couple of drinks (just to be sociable). Cathie could not believe that none of the side effects of the tablets had kicked in, as she was managing to consistently win at the cards. Then, as we were approaching Belfast lough, Cathie was overwhelmed with fatigue and had to rest her head on the card table (this made if very difficult to continue playing as her head was too bumpy to deal the cards on). Unfortunately Cathie did not get the opportunity to see much of Ireland once we disembarked as the sea sick tablets had truly kicked in and she was out for the count in the back of the car. The sedative effect endured for quite some time, necessitating her going for another sleep when arriving at Philips and only managed to stay awake to have some dinner and swiftly was back in bed zonked.

When we got off the Ferry we were heading for my cousins house in Donaghadee (the town where my dear mother was born). Our schedule was to stay overnight in Donaghadee and then head up the Antrim coast taking in the Carrick-a-Rede rope bridge (again photos to prove I did it) and then onto Bushmills Distillery (the Boys will no doubt update you on this excellent visit) for a wee tasting. From Bushmills we then headed off to Letterkenny and then up to Rathmullan. 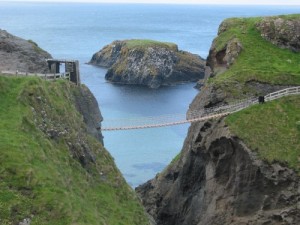 It is a well known fact that I am terrified of heights and ensure that I avoid getting into precarious situations i.e. I don’t go hill climbing or going up ladders etc. When arriving at Carrick-a-Rede Jim informed me that I would now have to go over the bridge as Dougie (little darling that he is) had bought me a ticket. Well – as if it wasn’t bad enough my charming husband thought this was a real hoot and stood at the other end of the bridge as I was about a third of the way across and started wobbling and shooggling the bridge. As we quaintly say here “my bottom was making buttons”. I was really scared and completely out of my comfort zone. In his truly supportive and nurturing way Dougie was taking photos of my pain, although struggling as he was hysterical with laughter. I was not a happy bunny, but due to no option, i.e. once you go over the bridge the only way back onto the mainland is by re-crossing the scary bridge – so I did it. Did not feel glorious about it, but none the less I did it – and actually have a certificate to prove it.

Then it was onwards and upwards to Bushmills. We were very lucky with the weather and the drive up the Antrim coast was delightful, it truly is a beautiful part of the world and should be visited. We continued our trip arriving in Rathmullan at about 6.30 in the evening. We (all 6 of us – two Whisky Boys with wives and my cousin Philip and wife Lorraine) had booked into the Waters’s Edge Hotel (would certainly recommend this hotel). We were all really blown away with this hotel. It has a fabulous location (check it out at www.thewatersedge.ie). The rooms were great, the atmosphere was really awe inspiring on the shores of Lough Swilly. The food in the restaurant was to die for and Lorraine commented that she felt this was the best meal she had ever eaten when dining out – which is quite an accolade. We all thoroughly enjoyed our stay – for me that atmosphere was fabulous, there is something so comforting being so close to the water. The overnight stay was finalised with a hearty breakfast my preference being smoked salmon and scrambled 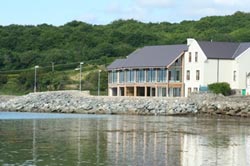 eggs and copious amounts of toast and coffee – it was great. Then came the whole purpose of the weekend. It was a short drive to the long sandy beach. It was a glorious morning, and mothers day (although that initially did not influence the choice of day to scatter my mothers ashes) and all conditions were perfect to say this final goodbye. I know in my heart she will always be with me, but I found it comforting leaving her ashes on the beautiful beach. Jim read a poem called “Goodbye to Donaghadee” and we each took a turn of scattering some ashes and saying our personal goodbyes. The hotel had kindly given us some flowers so we scattered them on the water and watched the tide pull them out to sea. It was a lovely informal ceremony and I truly felt I had done the right thing for her. After all scattering was complete all six of us took a leisurely walk along the long strand of beach and watched the riders and the trotting ponies pass up and down. It honestly was quite perfect.

Before we left Rathmullan is was decided that the Whisky Boys should toast goodbye to Kathleen in the traditional Irish way and both had a pint of Guinness – in a pub I think was called Paddy’s.

I would like to thank everyone who came with me on my mission to say a final farewell and wish my mother well on her continued journey.