Whisky Boys – Back to School, Week 1

The first day of this eight week course was Tuesday 18th January and Jim together with Scott (Nicola’s better half and trainee Whisky Boy) were in attendance. 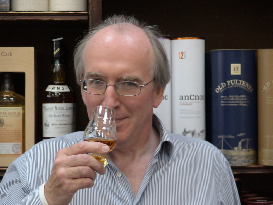 The tutor is John D. Lamond who has had many a year within the Whisky Industry, check out his website as we at Whisky Boys think it is a good and informative read.

We arrived a couple of minutes late and were surprised to see approx. 16/17 other students/Whisky lovers seated and taking in John’s lecture. Jim and Scott on the way into Glasgow had speculated and thought that the course may only have seven or eight pupils.

Jim’s first impression was that it all started quite nervously and there was a touch of apprehension in the air, but that was soon dispelled as the pupils got more and more involved in the course and were giving answers and views readily to John.

After the first hour everyone was relaxed and the course seemed to get into full swing, and the last half hour was set aside for a few tastings.

The drams that John supplied that evening were :-

From the tastings it was quite obvious that the majority of the pupils were Islay lovers, just like Jim. Our tutor John admitted he was a Speyside/Highland lover.

As the Laphroaig was the last dram for tasting, it tasted great, but when we then re-tasted the other Single Malts they all seemed to have lost a lot of their flavours and character, this being due to the strong and powerfulness of the grand Laphroaig.

This first evening was quite a success and Jim and Scott are both looking forward to next Tuesday.  John was kind enough to give us a breakdown of the topics being covered in the remaining 7 weeks:

Week 7. Distillery Visit (to be decided by vote next week)

Week 8.  Exam & the competition form the rest of the Whisky world.