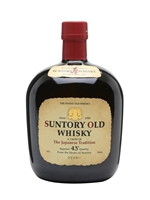 Suntory Old is a popular release from Japan. First produced in the 1940s, it remained one of the most prestigious whiskies to come out of the country until the 1980s when single malts grew in popularity. Medium-bodied with spicy notes, this is an excellent Japanese sipping whisky.