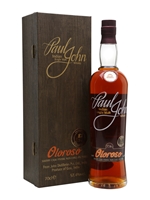 This limited-edition Paul John was aged for three years in bourbon barrels, before spending the final four years in oloroso-sherry casks. After the angels took their share, just 252 bottles were released, of which only 30 have made it to the UK. This is rich and complex with notes of orange, dark chocolate, fig and raisin.