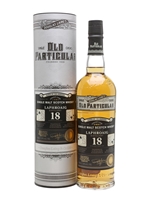 The first release in Douglas Laing's Consortium of Cards series is named Queen of the Hebrides. Distilled in December 1998 and aged in a refill sherry butt for 18 years. Rich and peaty with notes of tar, ash and soot, this is classic Laphroaig.