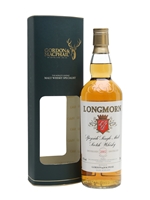 A 2002 vintage Longmorn from independent bottler Gordon & MacPhail. This was aged just into its teenage years before being released in 2016, and displays notes of citrus fruit, apples and raisins.