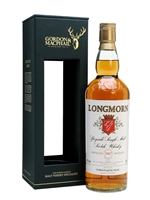 Another incredibly priced retro-labelled old Longmorn bottled by Gordon & Macphail from their scarily well stocked warehouses - this one was distilled in 1967 and bottled in 2015 at more than 45 years of age.