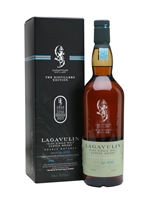 This is the 2000 vintage of Lagavulin's Distillers Edition, bottled in 2016. By far the most popular of the series, this double-matured Lagavulin has had a finishing period in sweet, sticky Pedro Ximénez sherry casks. A whisky that never disappoints.