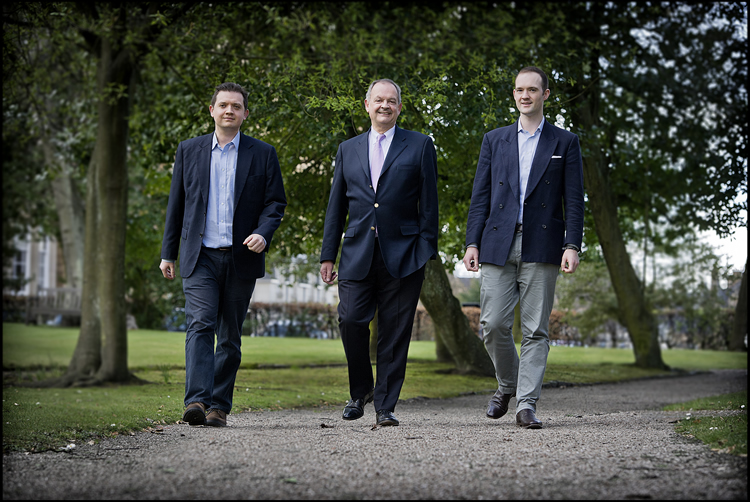 With the fortunes of the Scotch whisky industry continuing to rise, a new company has been formed by experienced whisky entrepreneurs, Stewart Laing, and his two sons, Andrew and Scott, to capitalise on the opportunity and provide the ever-developing audience of whisky drinkers with new products.

Formed on 11th February 2013 and trading from today at its new headquarters in Park Circus, Glasgow, independent bottler and blender Hunter Laing & Co begins operations with considerable key assets that have been retained by Stewart Laing following the de-merger of Douglas Laing & Co’s ownership, which was formalised yesterday.  These assets include the whisky brands Old Malt Cask, Old & Rare, Douglas Blend, John Player Special and Sovereign, plus a bottling plant, a workforce of eight (not including shareholders) and three generations of whisky business knowhow.

With a network of importers and retailers stretching across 65 markets, Hunter Laing & Co will be embarking on a strategy of strengthening the position of brands now in its portfolio and developing new products to meet the increasing demands of drinkers in Asia, North America and the Nordics, especially.

Joining the business as shareholders are Stewart’s two sons, Andrew and Scott.  Both will be bringing valuable experience to the business – Andrew and Scott were directors of Edition Spirits Ltd, an independent bottler of single malt Scotch whisky.  Scott, who has an MBA and a degree in law, is company secretary.  Hunter Laing & Co will bring Edition Spirits and its brands into its fold.

Commenting upon the formation of the new company, Stewart Laing, Managing Director, said: “My father provided a sound basis for me to have a very enjoyable 40 years in the whisky business so far and with Hunter Laing & Co we’ll see the family tradition maintained for the next generation of the Laing name.  With the industry fast developing, it is important for small players to be flexible, innovate and use their relationships to maximum effect.  The structure of Hunter Laing & Co will allow us to do exactly that as we build momentumwith our portfolio of much-loved brands.”

Adding to his father’s comments, Andrew Laing, Export Director said: “The whisky industry is in buoyant mood and the future outlook is promising.  Being able to join my father in business and glean from him the insight and knowledge that has served him so well will be invaluable as we build Hunter Laing & Co into a major independent blender and bottler.”

“With Edition Spirits, we secured some fabulous casks for bottling and have developed a sound brand.  The assets now at our disposal will give us a far greater degree of flexibility to create and bottle some very special whiskies. It’s a challenge that we are all relishing,” said Scott Laing, Business Development Director.

The brands now under Hunter Laing & Co ownership are:

The bottling facility in East Kilbride now owned by Hunter Laing & Co will continue to service third party companies and brands.  The new company will be run by its three shareholders, along with David Armour, Finance Director, and a sales, marketing and operations team of seven.