Black Bottle is one of the Whisky Boys all time favourite Blends and the new design is outstanding. Owners Burn Stewart have taken the brand back to it’s 1879 original including using black glass.

The dram inside the bottle has also changed, a little less peat, still at 40% Alc/vol in a 70cl bottle.

The Whisky boys will be tasting this soon and look out for our tasting notes.

Recognising excellence in bottle, label and pack design, the World Whisky Design Awards are judged by an international panel of design experts who also consider factors such as breakthrough in category, inspiration, confidence, craft skills and insight. The San Francisco World Spirits Competition is considered the most respected spirits competition in the world, with over 1,400 spirits blind-tasted by a selection of the industry’s leading spirits experts.

Commenting on Black Bottle’s distinctive black glass bottle, which replaced the previous standard green bottle, the World Whisky Design Awards judges described it as: “A beautiful, superbly crafted bottle, that is a real move on from the existing design and which picks up on the brand’s heritage to present a compelling and authentic looking product.” 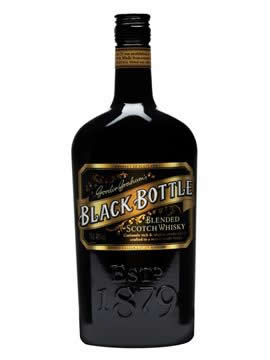 Black Bottle, a premium blended Scotch Whisky acquired by Burn Stewart in 2003, was re-launched in October 2013 with a new look and new liquid, both of which were inspired by the original vision of Gordon Graham dating back to 1879 when he used his tea blending skills to create his first whisky, initially only for close friends and family. This new look is a modern interpretation of the iconic black glass bottle, which gave rise to the Black Bottle name over a century ago and of which only a few intact examples still exist today.

The new liquid that earned Bronze at the San Francisco World Spirits Competition was created by Burn Stewart Master Distiller, Ian MacMillan, who took inspiration from the original recipe of Black Bottle and re-introduced a richness to balance the smokiness of the blend. The result is a curiously rich and slightly smoky whisky that maintains the distinctiveness of Black Bottle but adds another layer of depth to the liquid.

Marco Di Ciacca, Global Marketing Manager for Black Bottle, said: “We are thrilled to win these awards for Black Bottle and are particularly proud of the new design as it has real stand-out when compared to other brands in what is a fairly traditional category. It is also a significant departure from the previous design and we believe this award is further evidence that we have taken the brand in the right direction.”

Black Bottle has an ABV of 40% and is available to buy in the UK in selected on and off trade outlets with an RRP from £18.