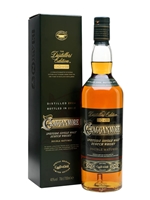 The Cragganmore entry in Diageo's Distillers Edition series is one of the more unusual – it is finished in port pipes for extra sweetness and fruity depth. This is the 2004 vintage, bottled in 2016.