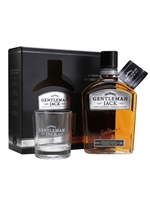 A gift pack containing a bottle of Jack Daniel's Gentleman Jack and a tumbler. Well worth the extra, Gentleman Jack is charcoal-mellowed twice, before and after the ageing process, resulting in a cleaner, more refined end product. Packaged in a smart Monogram-esque bottle.