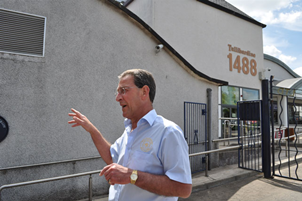 The home of this Distillery is on the southern edge of the town of Blackford on the A9 which is the main road north from Glasgow.

This Distillery also has the 1488 visitor centre together with a well stocked shop and Cafe. 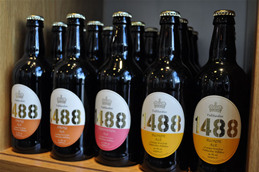 Please check out their website to see the various tours that are available.

Also check out our Gallery for many images of our wee tour of this fine Distillery.

A few days prior to visiting Tullibardine we made contact with Gavin Cuningham, (Tullibardine’s Travel Trade & Tours Manager) and we agreed on Friday 4th June 2010 at noon would suit us all for a Distillery tour and a wee tasting.

At the appointed time Jim, Nicola and Scott arrived and were met by Gavin. Once we were all introduced to each other, Gavin then gave us a brief history of the Distillery including why 1488 is so prominent. 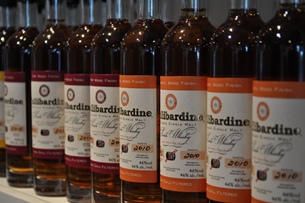 In 1488 King James IV bought some beer from the brewery that stood on the site that Tullibardine Distillery now stands.

Gavin’s knowledge of Whisky and Tullibardine and his enthusiasm was a joy to experience.

Gavin showed us around the full process including, Mashing, Fermentation, Distillation and finally Maturation, this is very much a working Distillery and the tour was even more enjoyable because of this.

We were then taken into the warehouse where rack after rack of casks were sitting working their magic in silence, (see our photos on the gallery) 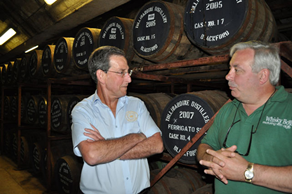 We finished off the great tour with Gavin taking us into the tasting bar for a wee dram or two.

Gavin introduced us to his favourite expression of Tullibardine and that was an 1988 which we really liked, and this was followed by a cask strength expression which was nice but not as good as Gavin’s favourite.

This tour and tasting would not have been as good as it was if it was not for Gavin, his enthusiasm was infectious.

For anyone who meets Gavin at Tullibardine you will notice that he has an accent, he hails from South Africa, but loves Scotland and especially it’s Whisky, he could become an honorary Whisky Boy.

The Whisky Boys must now give a BIG thanks to all the staff at Tullibardine and especially Gavin for a great tour and tasting.

Now all you travelers out there that head north for you holiday’s and day trips, make a point of stopping off at Tullibardine Distillery and go in and say hallo, enjoy a wander round the shop and then enter the cafe, but if you have a little time to spare then do take the tour, you will not be disappointed, and you will have an even better time if you get Gavin to show you around.

As always when you pop into Tullibardine tell them the Whisky Boys sent you.