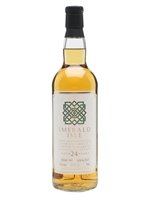 The third entry in the Emerald Isle range, and it's as impressive as the rest. A 24-year-old Irish single malt, with all the tropical fruit you could wish for in a whisky.