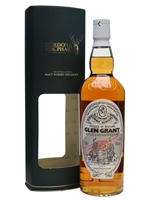 Carrying the classic distillery label, first seen in the days when Gordon & MacPhail were Glen Grant's official bottler, this was distilled in 2004 and bottled in 2015 after more than a decade of maturation.