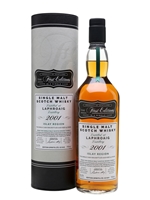 This 2001 Laphroaig was released in 2016 as part of Hunter Laing's The First Editions series. Aged in a single refill hogshead, this is smoky with notes of honey, vanilla and seaweed.