On the 14th March 2017 we received confirmation that Ardbeg would be releasing a new expression for Ardbeg Day which this year falls on Saturday 3rd June 2017.  The date that also sees Ardbeg bring Islay’s Festival of Music and Malt 2017 to a close.

atured in Virgin Black Sea Oak casks. Need to find out a wee bit more about these… anyone?

So, in the past Kelpies meant the phenomenal steel structure of the horse heads in Falkirk, now it has another meaning.  I think it would only be right to enjoy an Ardbeg Kelpie with Jim, possibly at the Kelpie’s – weather permitting.  There is a photo shoot in that somewhere.

If you enjoy an Ardbeg whisky, click here to see what’s available from our Whisky Shop.

Ardbeg is set to bring Islay’s Festival of Music and Malt to a close on Ardbeg Day, the global celebration of the single malt’s untamed spirit.

Ardbeg Day falls on Saturday, 3rd June 2017.  This year, in homage to the sea that surrounds the Distillery’s remote Scottish island home, Ardbeg will again release a celebratory Limited Edition expression. Ardbeg Kelpie is the first Ardbeg to be matured in Virgin Black Sea oak casks.  Re 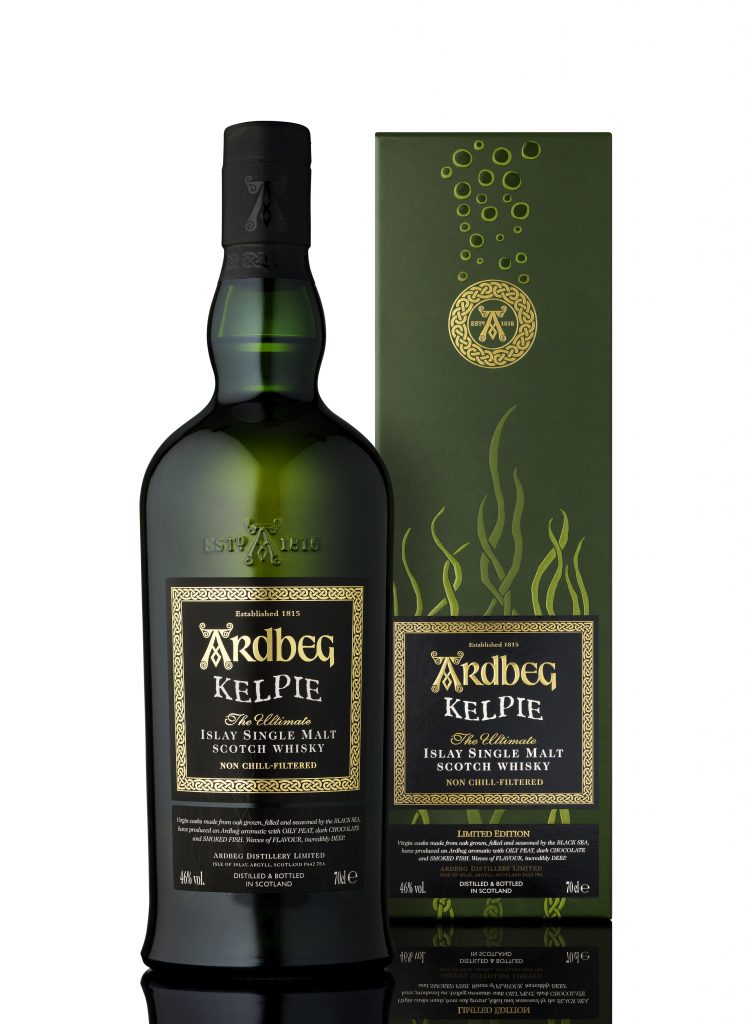 nowned for the deep flavours that they impart and rarely used in whisky making – these casks bring a distinct intensity to the world’s smokiest, peatiest Islay malt whisky.

Dr Bill Lumsden, Ardbeg’s Director of Distilling, Whisky Creation and Whisky Stocks, in his continuing search for intriguing casks, was inspired by the depth of flavour imparted by the Black Sea casks. Grown and seasoned in the Adyghe Republic, which leads down to the Black Sea coast, these casks impart incredibly deep flavours.

The whisky was then married with hallmark Ardbeg, matured in ex-bourbon barrels, to amplify Ardbeg’s characteristic style and create a whisky of incredible depth.

As the festivities begin on Islay, Ardbeg’s loyal following – the Ardbeg Committee – and their friends across the world will be invited to join underwater-themed events which pay tribute to the whisky’s namesake – the kelpie, this legendary water demon is said to lurk in the Atlantic Ocean off Islay’s shores.

“Ardbeggians and their smoky malt friends will have the chance to celebrate with a dram or two of Ardbeg Kelpie.  With a heart matured in Black Sea casks, this whisky’s extraordinary depth and its waves of salty seaweed and tarry rope, hint at what might be hiding under the sea…”

“For now, the finer details of our plans for will remain a closely guarded secret, but rest assured Ardbeg Day 2017 will be another legendary worldwide celebration of all things Ardbeg.”

Ardbeg’s general release of Kelpie at 46% ABV, launches on Ardbeg Day (3rd June), the expression will be available to purchase from Ardbeg Embassies* for a two week exclusive period. Kelpie will then be available at Ardbeg Embassies, whisky specialists and department stores with a RRP of £98.00.

The Committee only release of Kelpie at 51.7% ABV will be made available on 16th March 2017 at 9.00AM, exclusively from www.ardbeg.com

Ardbeg Day will be celebrated at the distillery on Saturday 3rd June 2017 and at participating Ardbeg Embassies around the world.

Ardbeg Kelpie is non-chill filtered for extra texture and mouthfeel.