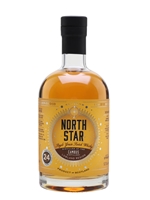 This bottling of 24-yar-old single grain whisky, brought to life by North Star Spirits, contains spirit that was distilled just before Cambus was closed in 1993. Rich, buttery and spicy, it was aged in a single Pedro Ximenez sherry butt and bottled in September 2017.