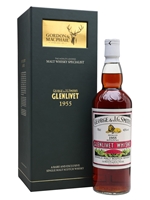 A single-cask bottling of 1955 Glenlivet single malt, created from a first-fill sherry butt. Part of Gordon & MacPhail's Rare Vintage collection, this has notes of rich sherry, smoke, fruitcake and mint. The bottle features a label in the style of those used by the distillery at the time this whisky was distilled, and the presentation box includes a hand-signed certificate.