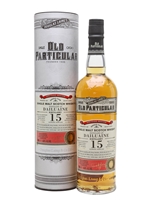 Douglas Laing have saved a sherry cask of Dailuaine from the blenders and bottled it as part of their Old Particular series. Aged for 15 years, this single malt is full of rich fruit, cocoa, and citrus notes.