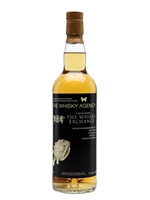 Delicate and complex, this long-aged Bunnahabhain will delight any fan of unpeated Islay whisky. Mineral, seaside notes are joined by red fruits and raspberry, enlivened with just a touch of lemon. The definition of restrained elegance. This limited-edition bottling has been created exclusively for us by independent German bottlers The Whisky Agency.