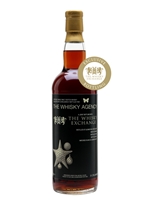 There's no mistaking the fact that this single malt has been aged in sherry casks. A deep garnet colour, it exudes rich notes of dried fruits, coffee, spices and toffee. On the palate those characteristics are balanced by soft fruit, but this remains a stonking dram with a dense sherry core. This limited-edition bottling has been created exclusively for us by independent German bottlers The Whisky Agency.