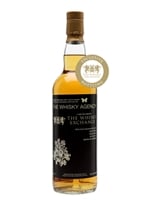 This 25-year-old Campbeltown single malt whisky comes sailing in on a sea breeze, bringing with it notes of honey, cloves and citrus. A rich, oily dram and a fine example of Glen Scotia's distinctive coastal character. This limited-edition bottling has been created for The Whisky Exchange by independent German bottlers The Whisky Agency.