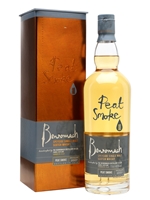 Benromach Peat Smoke distilled in 2007 is part of the small number of batches of peated whisky produced at the Speyside distillery. With a level of 62ppm, this is seriously smoky with notes of liquorice, orange (without water) or grapefruit (with water).