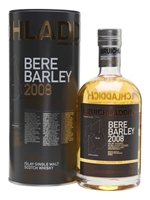 Originally released exclusively for travel retail, Bruichladdich Bere Barley 2008 is the third release in the series and uses grain grown on Orkney. This has notes of honey, toast, coconut, ginger, melon and pear.