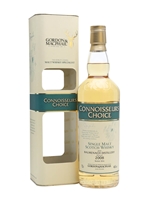 A 2008 vintage whisky from Balmenach, the location at the centre of Inver House's group of distilleries. It mainly goes into blended whisky and doesn't have an official bottling but a small amount gets out through independents like Gordon & MacPhail. This was aged in a combination of refill-bourbon and refill-sherry casks.