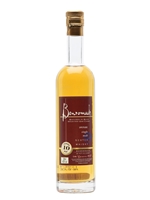 A 20cl bottle of Benromach's entry-level 10 Year Old, which has been a revelation since its introduction by owners Gordon & MacPhail in late 2009. A creamy, nutty and lightly smoky whisky.