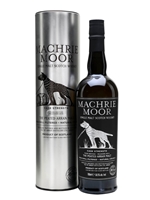 The third release of the cask-strength bottling of Machrie Moor, Arran's peated offering, bottled at 58.5%. Lightly peated to 20ppm, this is named after the eponymous peat bog located on the west coast of the island and has proved a popular addition to the distillery's range.