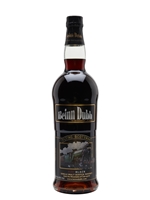 Beinn Dubh is a ruby-black whisky made at Speyside distillery. This special edition was launched in partnership with National Railway Museum to commemorate the return of LNER Class A3 4472, better known as Flying Scotsman, to the main line. Matured in charred casks, this is a rich whisky with notes of chocolate.