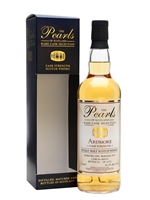 A rare independent bottling of Ardmore, the peated whisky produced close to the Speyside border. This was distilled in May 2000 and bottling in June 2016 as part of Gordon & Company's Pearls of Scotland series.