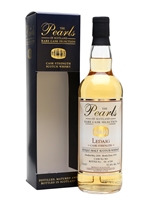 A release of young Ledaig, the peated whisky from Tobermory on the Isle of Mull. This was distilled in May 2008 and bottled in June 2016 at eight years of age.