A Couple of Fantastic Bowmore’s

The Whisky Boys would love to get their hands on one of these, but better do the lottery this week, but don’t these look and sound great.

The new release from Bowmore’s celebrated 1964 compendium, and the Bowmore 1985 from the acclaimed 1980s Vintage Series

JULY 2012 – Bowmore, Islay’s first Single Malt distillery, is releasing two prized limited editions: Bowmore 1964 and Bowmore 1985. Handcrafted and nurtured by the Distillery Manager, only 72 bottles of the 1964 and 747 bottles of the 1985 exist globally. Priced at £8,000 and £300 respectively, these are valued collectibles for any whisky connoisseur and enthusiast.

Like all Bowmore whiskies, these two remarkable expressions started life with the very finest ingredients: the purest water drawn from the peat-laden Laggan River, the finest barley from the Scottish Borders, and nature’s miracle worker – yeast. With rich peat, sea salt tang, seaweed infused breeze and a dedicated team of craftsmen, each component has helped shape these magical Single Malts.

The latest exclusive from Bowmore is a Fino Sherry cask finished expression that encapsulates all of its island home in a bottle. Widely regarded as one of the best years in Bowmore’s production history, this rare expression follows in the footsteps of the sought-after Bowmore 1964 Trilogy. Beginning in 2007 and ending in 2009, the Trilogy was the first of the 1964 compendium to be released, and with just a few hundred bottles ever produced, it still stands as one of the most prized collections in the world.

With such an imposing legacy, the Bowmore 1964 has certainly lived up to its predecessor; this lovingly handcrafted liquid is truly exceptional and extremely complex. This Bowmore 1964 encapsulates the fresh, crisp and cooling coastal atmosphere of Islay. Aged for nearly half a century, the whisky’s home was a specially selected North American bourbon cask followed by a Fino Sherry cask, during which the characteristics of the whisky have evolved and refined to create a teasingly complex and elegant balance, with the trademark top note of fresh, sweet, tropical fruits – a phenomenon and mystery that super-aged Bowmores have become famous for. Coupled with gentle sea-salt, lengthening and cooling the palate, the whisky leaves a beautifully elegant finish.

Bowmore commissioned Brodie Nairn and Nichola Burns, two of Scotland’s if not the world’s foremost glass artists, to design a striking vessel worthy of this wonderful malt. Each bottle has been hand-blown and painstakingly sculpted using molten glass, with a unique design that takes inspiration from the waves of Islay’s Loch Indaal.

Hamilton & Inches, Edinburgh’s leading jewellers and Warrant Holder to the Queen, provided the finishing touches. Using time-honoured techniques, the skilled team of silversmiths, engravers and polishers created the solid silver neck collars and stoppers that complete every bottle of Bowmore 1964. Each of these works of art has been meticulously hand-engraved with the spirit information and bears both the Hamilton &Inches Sponsor mark and Edinburgh hallmark.

Reflecting its natural roots, a rustic crate made from Scottish sourced oak provides the perfect casing forthis homage to Islay.

David Wilson, Sales and Marketing Director at Morrison Bowmore, comments: “We’re proud to present what is 46 years of craftsmanship and Islay’s essence in a bottle. Every Bowmore limited edition bottling is special, but the ever-dwindling stock from the 1960s means that the Bowmore 1964 is truly exceptional and rare.”

On the nose, discover ripe peach water, floral rose water and just a wisp of smoking barley. A sip reveals lusciously ripe peaches, but balanced by a more acidic note – something akin to juicy blood oranges or sharp pink grapefruit. Next comes wood with coconut creams and sweetness, leading to a finish of gentle peat fires glowing in the dusk. 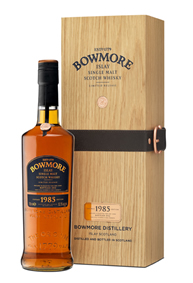 Also launching this year is the Bowmore 1985 Vintage, which follows in the footsteps of the previous 1980s Vintage series. Created from a unique combination of hand-selected sherry and bourbon casks, the expression is remarkably rich and fruity, balanced with the trademark Bowmore sea -salt tang, and possesses more smoke and depth than the earlier Vintage releases. This unique edition is a classic Bowmore; smoke, fresh Atlantic sea-salt and layers of fruit complexity.

Presented in a wooden gift box with a ‘weather-beaten’ brown leather strap and copper buckle, each bottle is also accompanied by a hand-signed and numbered certificate by the Bowmore Distillery Manager, Eddie MacAffer.

Islay is the southernmost island of the Inner Hebrides, and is also known as “The Queen of the Hebrides.” Its mild climate and rich peaty soil make it ideal for creating whisky, and despite having a population of not much more than 3,000, it’s home to no fewer than eight distilleries.