Jura Releases “One for You”

Jura has released a new 18-year-old to complete the trio of whiskies produced to celebrate the remote island and its spirit. Native Jura residents are referred to as Diurachs and it’s commonly known that on this island people are vastly outnumbered by Deer.  Located to the right of Islay this southern Hebridean island is very different in the landscape to its neighbour, enjoying mountainous peaks – fondly known as the paps of Jura, and also is home to the largest natural whirlpool in the northern hemisphere – Corryvreckan.

See below the official press release:

Jura Single Malt Whisky has unveiled the final instalment of a limited-edition series, that celebrates community spirit and raises a glass to all the Diurachs across the globe, fittingly named One For You. 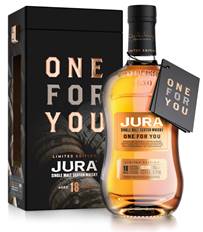 The celebratory 18-year-old single malt is matured in American White Oak ex-bourbon barrels and further enhanced by virgin American White Oak quarter casks, hand selected by our whisky making team. The enhancement in fresh oak adds extra character to the flavour, with more of the malt exposed to the wood. This small batch release (52.5% ABV – Cask Strength), which is non-chill filtered and natural colour, is available in select markets with an RSP of £130.

One For You completes the three-piece collection started in 2016 with One For The Road, a commemorative bottling to mark the retirement of Jura’s Distillery Manager, Willie Cochrane. A year later, Jura released One And All, a single malt assemblage created in celebration of Jura’s community and the team of distillery workers who craft the award-winning whisky. The trio is concluded by the latest limited edition launched today, One For You – in homage to Diurachs worldwide who share the spirit of Jura’s island community.

Visitors to the Jura Whisky Festival on 31 May 2018 were treated to an exclusive pre-release allowing them to purchase the limited edition which was brought to the island by RIB the night before festival day.

Graham Logan, Distillery Manager said: “This special limited-edition expression has been created with our extended community in mind, with flavours of honey, vanilla, almond and white chocolate it is the perfect whisky to toast those who embrace the Jura spirit worldwide.”

One For You is available online and in shops in select markets globally (UK, Germany, France and Asia) RSP £130.