This is number 12 in our journey to find out a little bit more about some of the influential people in the Whisky Industry. The Whisky Boys met Raymond at his Distillery, and we both had a great time, and we look forward to meeting Raymond in the very near future.

Now how did Raymond get on with our questions. 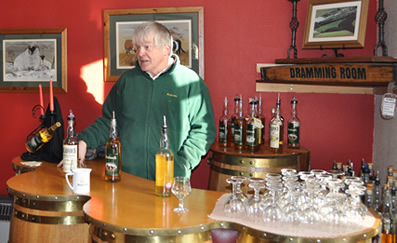 A. I’m afraid I don’t have a family background in the industry and it was pure chance that we ended up owning Bladnoch. I’ve always loved Scotland and happened to come across the place while in search of a holiday home.

A. In my pre grey hair days I worked in Belfast Water Commissioners and was also making maps in the Ordnance Survey and as a Valuer in the N Ireland Civil Service, so it would have to be an out-door job offering some degree of independence, perhaps something like the Forestry Commission.

A. Surprisingly it wasn’t managing to buy the Bladnoch Distillery, the payment was made electronically, so that wasn’t much craic. It wasn’t even seeing the first run of the Bladnoch stills, having spent a year installing much of the plant and equipment; I think it was seeing all of our warehouses full again, admittedly filled primarily with the casks from many other distilleries, but the rent from these have ensured Bladnochs financial viability.

A. Obviously my number one love is Bladnoch. After closure in 1993 whisky writer Brian Townsend summed it up nicely in a great little book “Scotch Missed” the Lost Distilleries of Scotland. “Few distilleries can match it for the richness of its history and its stubborn ability to survive for so long against such odds” Everyone likes a tryer, whether it’s in sport or life or business and there have been many times over the past nearly two hundred years when Bladnoch has struggled but it has managed to survive and in 1817 celebrate its bi-centenary. If I was forced to choose a favourite distillery in which I have no financial interest, I think it would Fettercairn which is charming. Very rarely have I visited a distillery and not found it a friendly place.

A. I’m not often in pubs but I prefer them to have a bit of age and character and I don’t like to be pressed for time. I like a drink with close friends and the experience is better if the friends like Whisky. Enjoying a dram with someone who is drinking a pint is not nearly as agreable as with someone who knows the satisfaction of a nice dram.

A. Yes, it was a Whisky (which I cant name) with a great reputation but unfortunately I didn’t like it … even great Whiskies need to have matured in good casks.