On an extremely warm day (85ºF+) in Alma, Michigan (Scotland, USA), the American Ambassador for Whiskyboys.com visited the Alma Highland Games – well, more specifically, the Beer Tent. This was the 43rd annual Highland Games and Festival, held on the grounds of Alma College. But beer was not my object, I opted to indulge in the 3rd Annual Scotch Tasting Event, sponsored by Masonic Pathways Senior Living Services (I hope those seniors get a tasting every now and then).

Four Whiskies were on offer (none of them new to me, but I’m always willing to give it the old college try). So I settled in to enjoy the delights of Cragganmore, Caol Ila, Glenmorangie and Talisker. 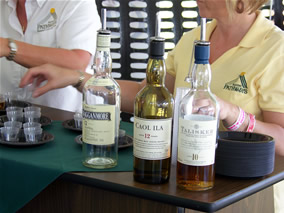 The first glass held Caol Ila, a 12 Year Old island Whiskey from Islay. It’s earthy, salty and smoky. Folks say it’s an excellent accompaniment to a fine cigar (can’t tell you that for sure – I gave up smoking about 12 years ago).

The Speyside Cragganmore 12 Year Old is heavy-bodied, spicy, and offers a hint of vanilla. It’s a strong taste, but I quite like it.

Talisker, the only 10 Year Old Scotch in the bunch, is very peaty, smoky, with a distinct taste of hickory. This Skye whisky is good for people who really like smoky single malts.

The 12 Year Old Glenmorangie is smoky, with a touch of saltiness.

It sometimes pays to revisit old friends, and I enjoyed these in the company of some newer friends from our local Scottish Country Dance group.

Highland Games in America feature some of the same traditional activities found at Scottish games: highland dancing, pipe bands, athletics such as the caber toss and farmer’s walk. I’ve been attending the games in Alma for most of the 43 years they’ve been offered. Alma College was founded in 1888 by a Scottish Presbyterian minister. It’s one of the few colleges in the U.S. to offer scholarships in highland dancing and bagpiping. The early games used to be self-contained within one football field. Now the activities are spread throughout the ever-growing campus, and are attended by over 10,000 people on the Memorial Day holiday weekend. 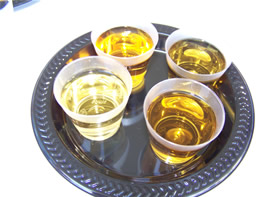 One feature a native-born Scots might be amused to see is the array of merchants selling authentic Scottish goods. I’ve been known to pick up a box of Scott’s Porage Oats, a tin of Bird’s Custard and a wee bag of Malteasers. None of these are products you’d find in your typical American supermarket—only in a few specialty stores. Being Olympic-caliber shoppers, my wife and I found a number of “treasures”: Ma Broon’s Cooking with Bairns cookbook, and The Broon’s Book o’ Gairdenin’ Wisdoms. I now boast not one, but two temporary tattoos—a saltire and the lion rampant. Several stalls offer Irn Bru—it’s amusing to hear the vendors explain that it’s Scotland’s “other” national drink—and it’s hard to compare the taste to anything found in American soft drinks.

I also picked up the 7th edition of Scotch: The Whiskey of Scotland in Fact and Story by Sir Robert Bruce Lockhard—look for a more detailed review in an upcoming dispatch from the American Ambassador.