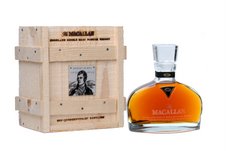 A limited edition of only 250 bottles has been produced and it’s envisaged that these will sell out quickly. The liquid comes from two casks chosen by The Macallan’s whisky maker Bob Dalgarno – one from 1997 and one from 1998, both numbered 1759, the year of Burns’s birth. The significance of the cask numbers was recognised by Bob and he felt it only appropriate to produce a special bottling for the homecoming year. The rarity of the liquid is a fitting commemoration to Scotland’s famous poet.

The whisky, which is a sherry oak expression with an ABV of 46 per cent, has been placed in a decanter made to an original design, based on the head and shoulders of The Macallan standard bottle. It’s exquisitely packaged in a handmade Scottish red pine wooden box designed by master cabinet maker Harvey McLean, whose workshop is only a few hundred yards from Burns’s birthplace in Alloway. The box carries a specially commissioned enamel plate featuring a portrait of Robert Burns. Each presentation box comes with a unique numbered printing of an individual Burns poem and a copy of an ancient map of ‘Burns Country.’

Ken Grier, Director of Malts for The Edrington Group, commented: “To bring a due sense of historical perspective to this celebratory bottling, we managed to persuade David Holmes and Nicholas Salaman to return to The Macallan to work on this unique project and their work is featured in the accompanying brochure carried within the presentation box. We have created a unique bottling celebrating the birth of the nations bard, linking Scotland’s Master of Poetry with The Macallan – Masters of Spirit and Wood.”

Holmes and Salaman are the two men who helped to bring The Macallan to the attention of a wider public over a period of 30 years. They worked on The Macallan advertising account when the brand was barely known outside Speyside. They produced over 100 advertisements, posters and commercials in a campaign, through their advertising agency Holmes, Knight Ritchie, that gradually grew in size as The Macallan itself developed – from 101st in the single malt league to number two by value worldwide.

The timeless reputation of The Macallan is founded upon Six Pillars:

Easter Elchies House proudly watches over The Macallan distillery in Speyside, Scotland. Built in 1700, this Jacobean manor house is The Macallan’s spiritual home.

The Macallan’s curiously small and uniquely shaped copper stills help to concentrate the flavour of the ‘new make’ spirit.

The ‘cut’ is the amount of distilled spirit collected from the stills as ‘new make’ spirit. The Macallan takes one of the ﬁnest ‘cuts’ of any distillery in Scotland; typically just 16% goes forward to fill or our casks.

The Macallan insists upon Natural Colour. It is the interaction of spirit and wood alone which delivers the rich variety of colour, aroma and taste evident through out the range.

The Macallan remains the single malt against which all others must be judged. It is celebrated far and wide by experts and discerning drinkers as the world’s most precious whisky.