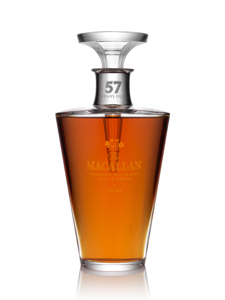 The Finest Cut decanter has been designed by the legendary French crystal house Lalique, exclusively for The Macallan. A limited edition of just 400 have been produced, each individually numbered and available in selected outlets in the USA, UK, Europe and Asia.

David Cox, Director of Fine & Rare Whiskies for The Macallan comments: “This is the third collaboration between The Macallan and legendary crystal makers Lalique. It is a truly stunning addition to the Six Pillars decanter collection. As a reflection of the beauty of the decanter we chose to fill it with a particularly rare 57 years old Macallan single malt whisky. It is the second oldest ‘vintage’ Macallan whisky ever released, only surpassed in age by the legendary 1926, a 60 year old Macallan bottled in 1986.

“The 57 year old has been vatted together from two casks; the first, a 1950 American oak sherry butt, the second a vatting of Macallan from Spanish oak sherry butts originally filled in 1949, 1951 and 1952. The result is a softly sumptuous single malt, showing off the classic dried fruits, spice and hints of peat redolent of The Macallan house style of the early 1950’s. Due to the rarity of the liquid, only 400 decanters will be produced.”

The third decanter in The Macallan in Lalique Six Pillars Collection takes its inspiration from The Macallan’s Finest Cut, that fraction of the new make spirit which is filled into casks for maturation. At The Macallan, this fraction is a mere 16%. It is the heart of the run, the best of the best, delivered at a very slow rate of distillation to maximise flavour and deliver the distinctively rich, fruity, linseed oil character of The Macallan’s new make spirit.

The decanter has been designed by Lalique’s Design Studio who were inspired by the legacy of Rene Lalique to design a decanter featuring the ‘stilligoute’ of a perfume bottle, the long piece of pure crystal flowing down to a point from the base of the bottle stopper. A portion of the stopper has been left completely clear and not “satinee”, running from the top down to the point. This clear portion represents the 16% ‘finest cut’. When inserted into the elegantly tapering decanter, the stilligoutte, bathed in the rich whisky, reflects the natural colours of The Macallan through the play of light; when withdrawn, you can appreciate the full, heady aromas exuded by each drop as it slowly runs down the crystal stem.

Silvio Denz, President and CEO of Lalique, comments: “We are delighted to be working with the world’s finest single malt as it has given us the opportunity to design a series of decanters which reflect all the best attributes of our brand – creativity, heritage and craftsmanship. The Finest Cut decanter was created by our design team in Paris and hand crafted at Lalique’s crystal making facility in Wingen-sur-Moder, Alsace. Each piece was worked on by up to 15 craftsmen, many of whom have attained the ‘Meilleur ouvrier de France’ – the Finest Craftsman of France Award. Each decanter bears the esteemed ‘Lalique France’ signature, which symbolises authenticity and over 100 years of creativity, heritage and craftsmanship, and comes in a beautifully designed lacquer presentation box, with a crystal stopper and a collectors guide, detailing the craftsmanship that has gone into producing this beautiful object d’art.”

The Macallan has been working with Lalique since 2005 to produce an exclusive series of limited edition decanters based on The Macallan’s Six Pillars. The first two decanters in the series, Exceptional Oak Casks and Natural Colour, have proved hugely popular with both whisky consumers and collectors of Lalique crystal.
Respected and admired by discerning whisky lovers and named ‘Distiller of the Year 2008,’* The Macallan remains the single malt against which all others must be judged.