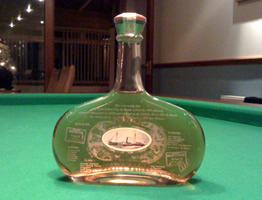 lover and colleague Deek Young from Edinburgh, that I must share the details of it with you all.

It is called Kelt Tour Du Monde, bottled by Invergordon, Distillery Limited in Leith, Edinburgh.  This very rare extra old pure Malt Whisky while still in oak barrels made a sea voyage aboard an ever green ship and was then bottled on its return to Scotland.  The reason behind this long distance maturation is printed on the box and goes thus:-

“Century’s ago it was discoved that Cognac, which was sent to the collonies, improved dramatically during the long sea voyage, eventually this was true for other spirits, such as Scotch Whisky sent from Europe and run from the West Indies.

The rolling of the sea the temperature variations, frequent air pressure changes and the sea air itself, round the spirit off in a beautiful way.  In the 20th century came the age of the brands, this meant that spirits were shipped in bottles rather than oak barrels.  The magical effect of the sea was lost as a spirit does not mature once it is bottled.

Kelt has revived this tradition and taken it one step further, we send our already aged spirits, still in oak barrels on a three months sea voyage around the globe. This the KELT TOUR DU MONDE creates a unique spirit and restores an aspect of quality lost for almost a century.”

A signed seal on the bottle also states its authebticity from the bottler Norman Mathison, Blender and Director at Invergordon Distillers.

This is such a lovely boxed bottle that I wont let Jim open it, so if anyone has tasted this little gem I would appreciate their opinion, or even better, where can we taste it!!?.