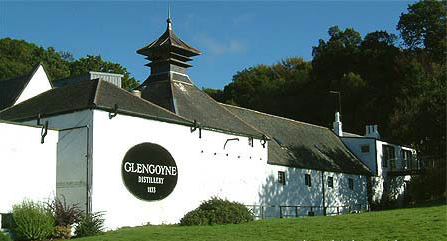 It was bitterly cold on the morning of Saturday 6th of December 2008 when the Whisky Boys (on this occasion only Jim and Nicola) set off to the Glengoyne Distillery – Christmas Food Festival 2008.

But we Whisky Boys knew that if this was held in a distillery then there is every chance a wee dram will be available and a good look round and maybe a tour of this fine distillery, we were not wrong.

We all arrived at Dumgoyne to find it well staffed for administering the parking and traffic control (well done guys and gals).

Did I mention that Jim and Nicola were not alone on this trip, also with us were Mrs. Jim, Mr. Nicola, Jim’s granddaughter’s Loren and Carla.

This gathering did not put the Whisky Boys off, Jacqueline and Scott looked after the bairns (Santa and story telling etc) whilst Jim and Nicola did what they do best, searched out the tours the shop and all things Whisky.

There was a very good turnout at this event and the stalls were all full of quality goods and enthusiastic sellers. The beer tent (inflatable bar) was quite unique but as the bar was basically outside it was decidedly chilly, but the hot food on offer was a welcome necessity. Great grub especially the steak and haggis pies, the venison and cranberry sausages and the roasting pig, all fabulous.

Well down to Whisky Boy stuff, Jim and Nicola went on the 12.30 tour which they admitted would be shorter than normal due to the large turnout on the festival day. Not to matter it was conducted professionally and none of the important parts of the distillation process and history of the distillery were left out, even the wee dram of the 10 year old was given out (wee being the operative word, leave it for a second or two and it would have evaporated) but a nice wee malt all the same.

Jim had a very good time enjoyed some of the banter with the staff behind the bar in the beer / Whisky tent, (still very cold, patio heaters next time would be good). Jim hopes to revisit and chat more about this unpeated malt and the other Whiskies that Glengoyne get involved in.

A big thank you to the managers and the staff of the Glengoyne distillery for a good day out (if it was not so cold, would liked to have stayed longer)

We hope to return soon and the next visit will have all three Whisky Boys there.(Jim, Dougie and Nicola).
Thanks again. You have a very nice distillery in a wonderful setting, lets keep producing fine malts of the Scotch variety.

Glengoyne have a good website and we would recommend that you view it, it has the history, details of there very well stocked shop, directions and a detailed list of events.

We are in the process of finalizing a Trans-Atlantic tasting session via the web and web-cam .

The Whisky Boys will be inviting a Canadian business-man and Whisky drinker to join us over the web to taste the 10 year old Glengoyne.  On Saturday we purchased two bottles of the Glengoyne 10 year old and soon one of them will be winging its way to Winnipeg Canada, this is a first for the Whisky Boys, we are going international, canny wait, look out for more information, and the results of the tasting which will be posted in the usual place.