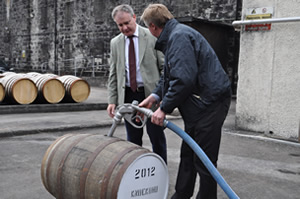 tilleries in Scotland, Knockdhu, little did we know that the official opening of the new warehouse would be happening on the Saturday whilst we were both there.

Back in January 2010 heavy snow fell and fell and the result was the collapse of one of the warehouses, with the loss of 18 Casks.  Just 2 years later a replacement warehouse was built by fantastic local craftsmen using the reclaimed stone from the old warehouse and the finishing touch was two beautiful stained glass windows which showed the distillery pagoda and were designed by Jane Bayliss. 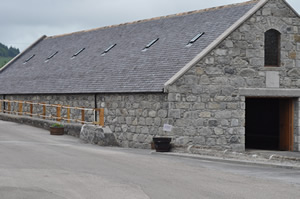 At the opening ceremony together with Gordon and Ally were representatives from International Beverage Holdings the international arm of Thaibev, Directors from Inver House Distillers (who are integrated into Thaibev) which controls the distillation and maturation of Scotch at it’s five distilleries.

The guest of honour was the Rural Affairs Secretary Richard Lochhead and his task was to fill the first cask (under the direct supervision of Gordon, who hates any kind of spillage) to be matured in the brand new warehouse.  Once this cask has matured is is to be donated Macmillan Cancer Care.

Once the cask was filled it was rolled slowly and gently into the new warehouse, drams were given out to the assembled crowd and Richard Lochhead gave a short speech 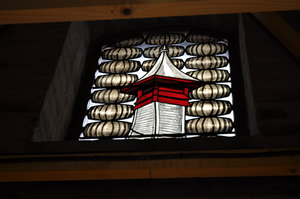 and officially opened the warehouse by splashing a dram of anCnoc over the new distillery gable end, you should have seen Gordon Bruce’s face when this was done, I thought he was going to get a sponge and carefully soak it up and put it back in the glass.

After all the official bits and bobs were over Nicola and I together with three staff from Royal Mile Whiskies, Edinburgh were asked into the wonderful visitor centre by Ally who proceeded to give us a few tastings of some exceptional expressions and vintages of anCnoc.

If any of our readers find themselves up in the Highlands, please try to visit this outstanding distillery, you will meet some great people and you may even get a wee look inside the new warehouse. 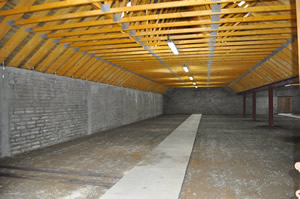 anCnoc recently unveiled a global collaboration with Scottish born, New York based illustrator Peter Arkle, resulting in a limited edition series. In 2011 Peter visited anCnoc’s Knockdhu distillery and his journey is documented in a film, produced in Scotland and New York, available to view at www.anCnoc.com.